A block of flats or a row of terrace houses, seem like an odd concept at the moment. I’m sure a semi detached doesn’t even exist here.

Mayu and I have got very accustomed to riding 80km between one small settlement to another. As water becomes scares so do the people, in such a large land mass the population only reaches 2 million. 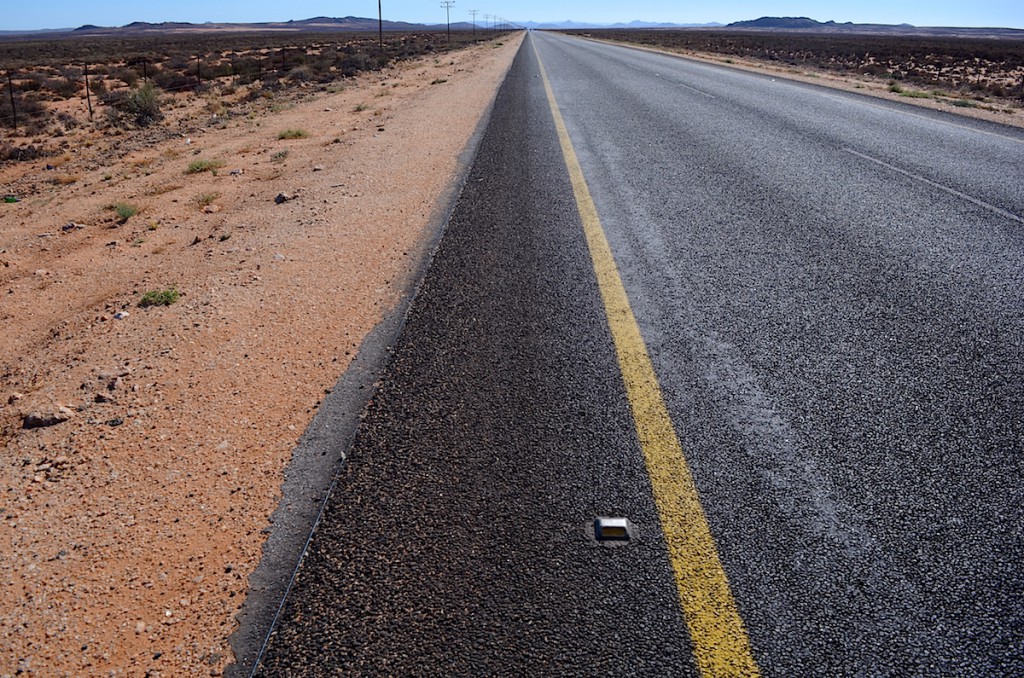 With so few numbers comes an incredible sense of freedom on these Namibian roads. We see less than 10 cars a day, and once night falls the roads become silent. Our life follows an easy routine of pedalling, eating and sleeping.

On the 1st May we crossed the boarder at Noordriver into Namibia. It was immediate to see the change in the peoples appearance. On the south african side, the cape malay influence was still strong. Once we crossed over most of the people had come from the northern areas of Namibia. Almost as though the boarder acted as a dam for people heading south. For the first time it really felt like we were riding into the African continent. 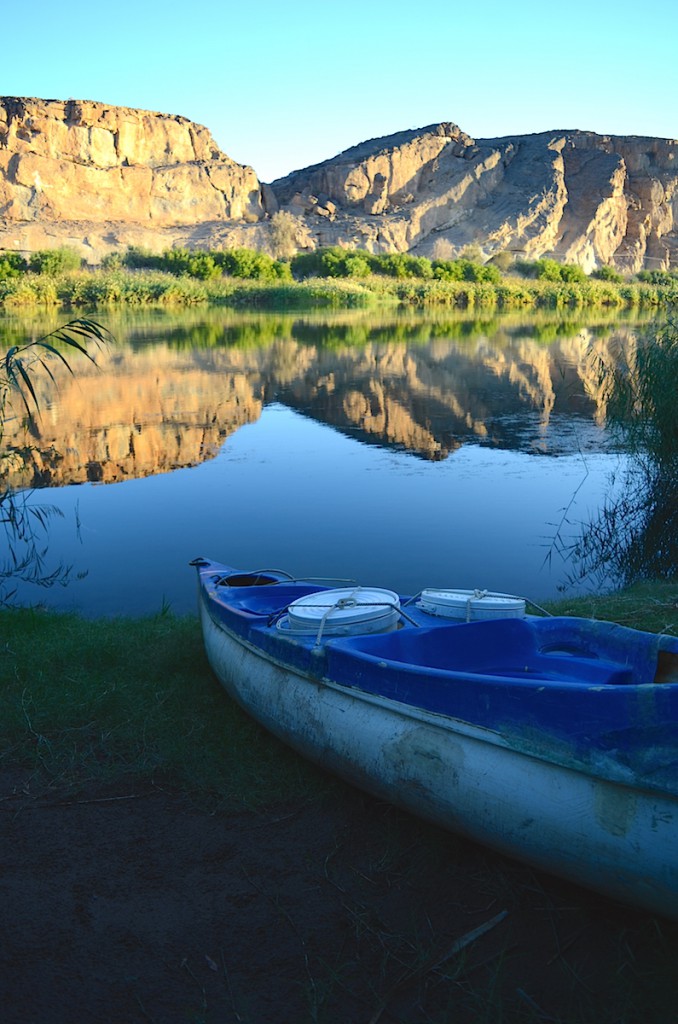 Upon arriving we spent 2 relaxing nights in a spot along the orange river.

During the day I sat with a camera in one hand and fishing line in the other. I caught a couple of small fish, our neighbouring camper said they were good to eat. Unfortunately they were subjected to macho peri peri treatment. He kindly invited us for dinner that evening and then viciously assaulted us with chilli powder. It was the thought that counted. So with our ends on fire, we blasted north for 50km to Aussenkehr. 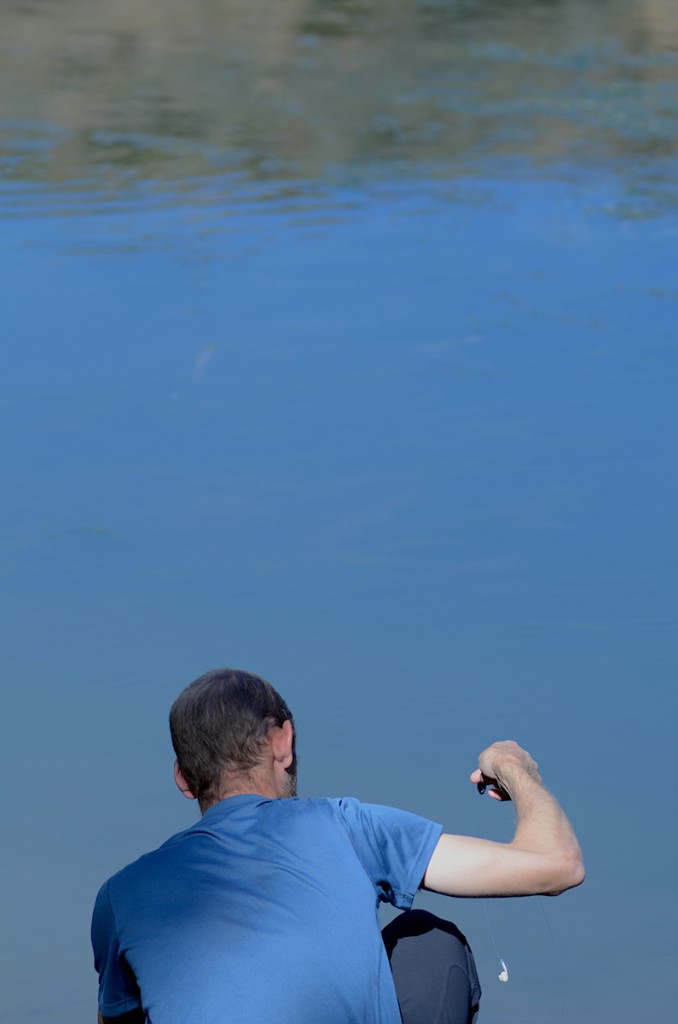 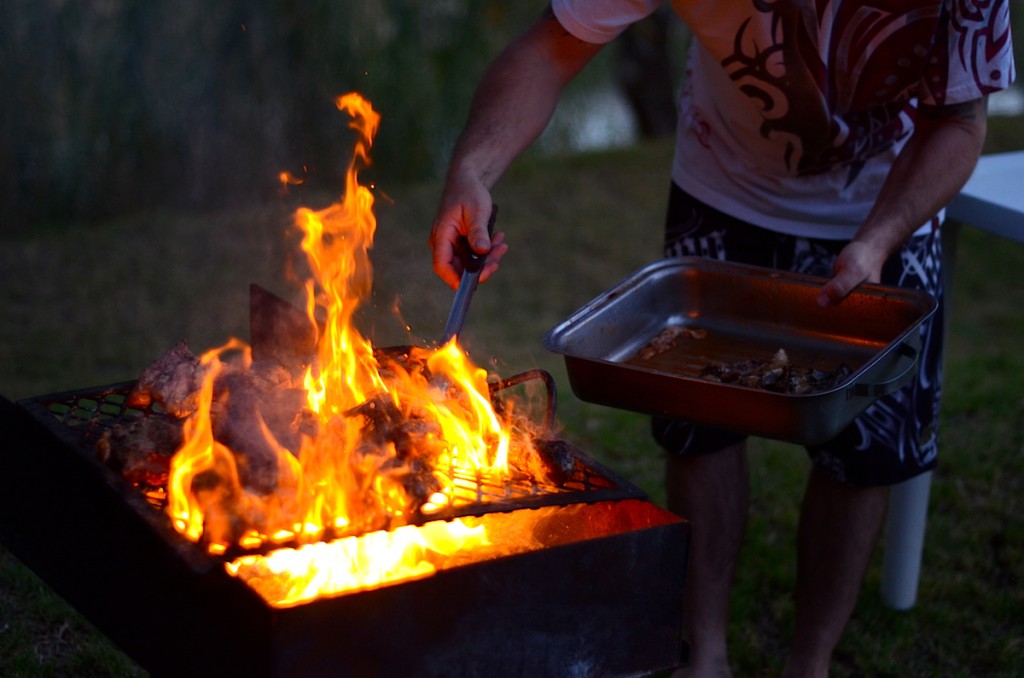 Aussenkehr struck me as a very odd place. Still hugging the orange river, the farmers were able to irrigate crops. However the only thing being produced was wine. It felt like a huge waste of resources.

Just a shame that exporting alcohol takes priority over fresh fruit and vegetable. Especially in an area where it is so hard to come by. There was a big population of people living here to tend to the vineyards. It looked like they had to provide their own accommodation, building huts out of river reed.

I can’t imagine how uncomfortable it must be there in the summer months, when temperatures hit 55 degrees plus! 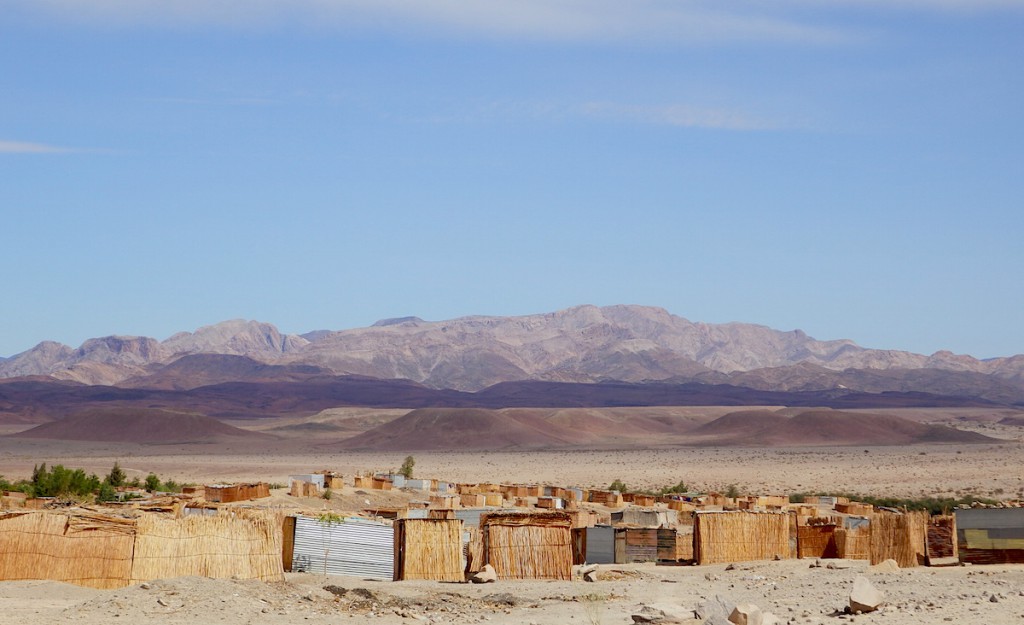 At the centre of all this was a Spar super market. Modern, air conditioned and just very out of place. It almost looked like it was serving as the local town hall. I found it hard not to feel guilty as we loaded our bikes with food for the week ahead.

Most of the inhabitants seemed to be paid so little. I felt if I was not willing to give sweets or money, the least I could do is truly appreciate what I have. I try and make this a daily reminder to myself, as we all have something that someone else might desire.

Not feeling full of joy, we left Aussenkehr. However my spirits were lifted that evening as we set up camp in the deserted landscape beside the road.We witnessed something I’d never seen before. As the sun set behind the mountains, the sky seemed to glow brighter and brighter. We couldn’t work out why. Maybe it was reflecting on something. It made me think about the sun setting constantly around the world as the earth spins.

It just a matter of who is witnessing it. For many of the busy people it goes unnoticed. For me there was nothing else to do, but to stand and stare. Wide eyed. Mesmerised by the sight. 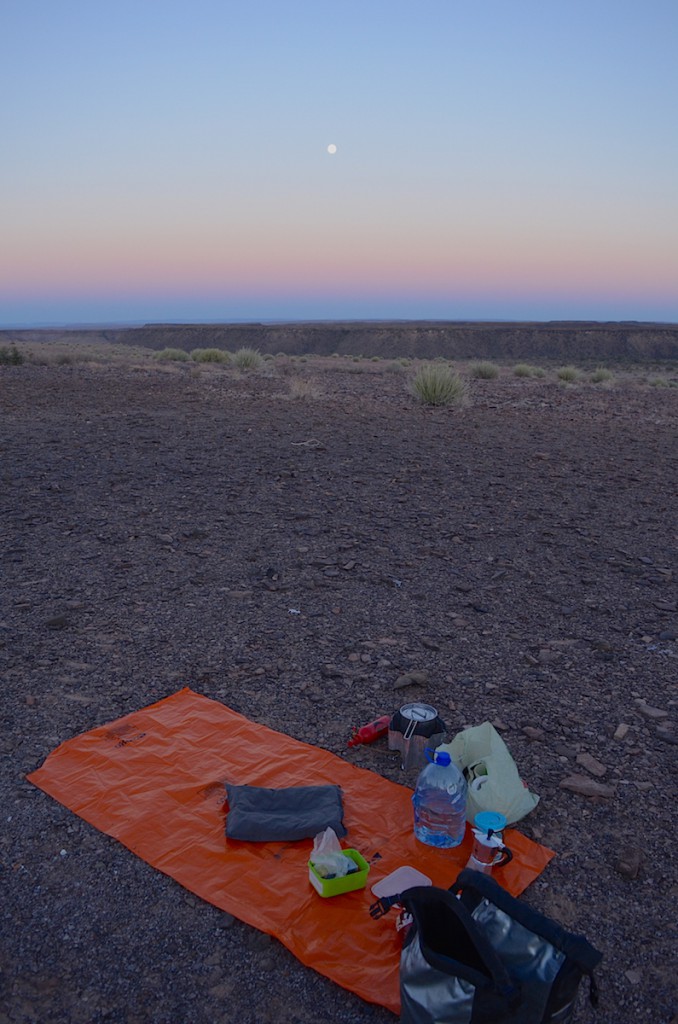 We’ve found the campsites of Namibia to be very expensive. We knew this, and its worked in our favour. It means we can spend more time sleeping in the middle of nowhere. Enjoying the night sky and waking with the sun.

A few places where we have gone to a camp site, have been noted as must see attractions. Ai-Ais being one of them. It’s a hot spring resort in the fish river canyon. Japan has made us a little bit particular on this. Mayu was not impressed.

Fortunately we put our bikes on a truck to avoid going up the 12km of steep gravel road down to Ai-Ais. However this lead to our next disappointment of not being able to hike for five days through the canyon. The lack of medical certificates proving that we were fit enough for the hike, meant it was back to the bicycle sooner than we had expected.

And so life on the desert road continues.

Spending 5 or 6 hours a day pedalling. Thinking many thoughts and eating almost as many peanuts. It’s not boring, its just a slow flow of the world drifting by. As we cycle north. But Occasionally something very dramatic happens.

“PUFF ADDER!” I shout after missing a snake by a few inches. These snakes are very slow and lazy, so they often don’t move from the road when they see something coming towards it. This gave me some time to get the camera out and get a close up with a zoom lens. I made sure I kept my distance. The horror stories of being bitten is not something I’d like to be a part of. 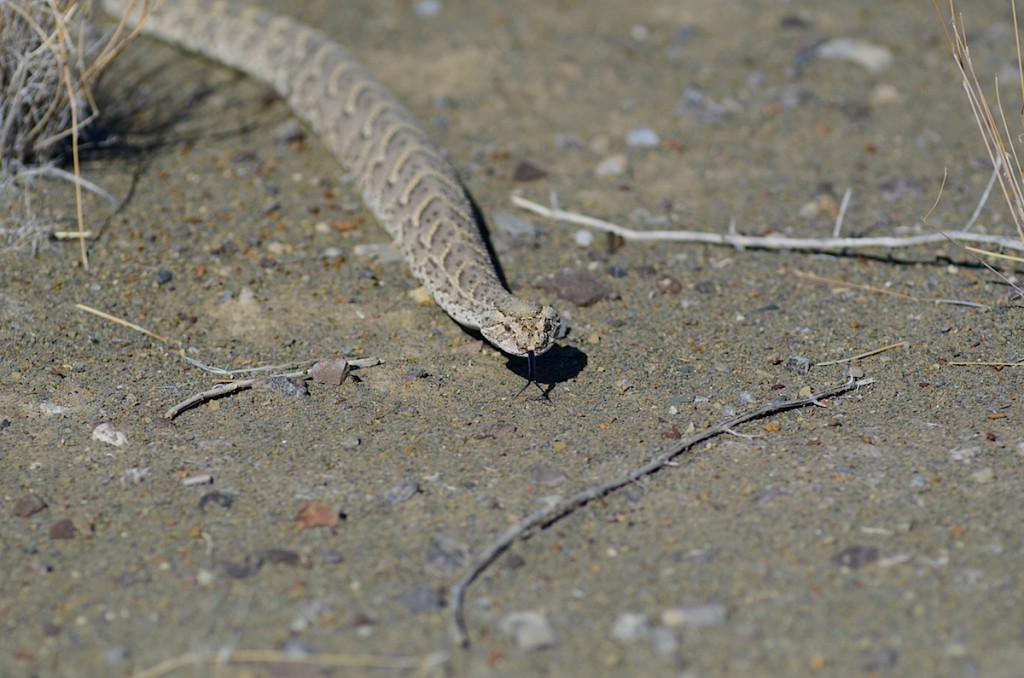 Our last surprise of the day came in the form of a dry river bed, with a puddle of water left in it. It doesn’t sound like much, and I don’t want to fluff it up, but I had such a good wash. So good I went back for seconds.

Now I can’t recall ever taking a nice hot shower, thinking it was so good. I’ll take another one. We decided to camp fairly close to the water incase we needed to refill our bottles. I thought it would be ok to ride the last 100m in pants. It got me thinking about those people ‘doctors without boarders’. I thought maybe from now on I could be ‘boxers without boarders’. 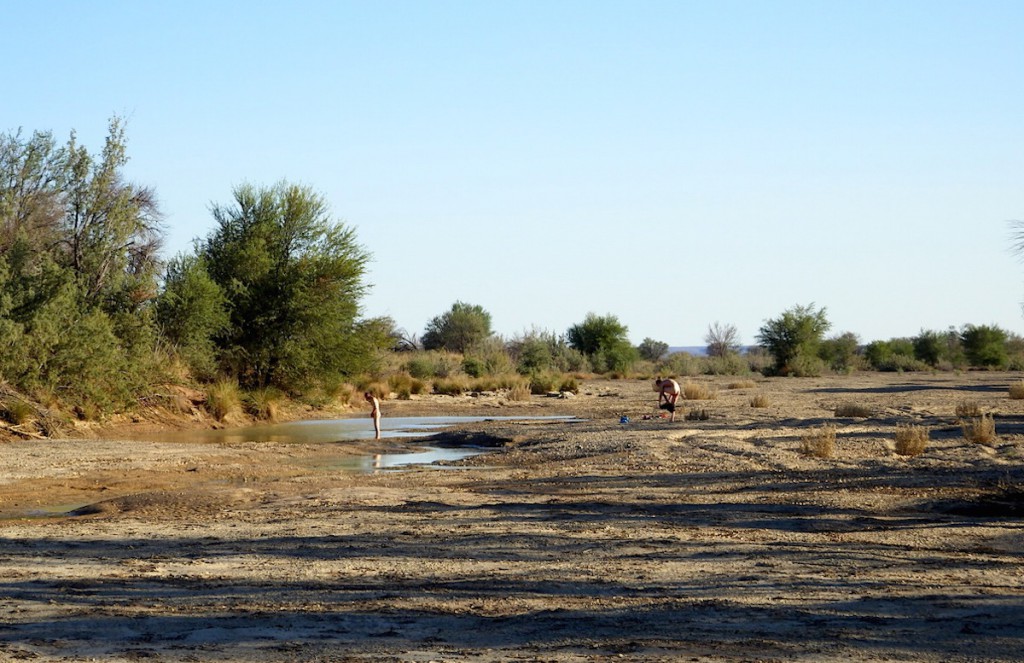