Yesterday I spent some hours tuning up our bicycles. Doing the usual stuff, cleaning the chain, the rims. Re setting the brakes to make sure I get maximum amount of wear out the pads. Basically some really interesting stuff! Of course I much prefer using the bike than cleaning it, but I’ve developed an injury on my achilles heel, since I started pedalling in my sandals. So whether we like it or not we are stranded until this set back improves. Coupled with the fact that we have given ourselves too much time in Uzbekistan, I couldn’t have my injury at a better moment.

The landscape has been pretty flat. We’re just eating through kilometers here. Hence the injury maybe, and to be honest we feel a bit restricted. There is a policy of registration that needs to be done once every three days in a guest house, or in our case as much as we can. Being on bicycle it takes longer to get from place to place sometimes. This restriction killed our freedom to roam, and reliance on having a tent and stove to be self sufficient. Maybe the single most attractive thing about cycle touring for us.

I’m sure you’re feeling sorry for me. Stranded in Bukhara, a place where tourists travel from all over the world to experience the history of these old silk road settlements. Our breakfast is cooked for us and somewhere around mid afternoon I hobble to the shop to get my icecream. Not exactly the hard life, but my body has taken charge and forced me to rest. Unfortunately the bike tools I carry can’t fix this problem. However I feel an improvement each day, keeping us positive about the upcoming mountains across the border.

Thinking back to the beginning of this trip. Its amazing that we managed to avoid a serious injury. Picking the route along the black sea in the middle of winter might have been, just about the worse place to ‘warm up’ after six months off the bike. The first couple of weeks I did feel my knees hurting quite a bit. I wouldn’t say it was injury, more of an on going agony that would subside after resting for a day or two, but returning after few hours of cycling. I had a pretty fancy new bike from Stanforth bicycles. It was very close to being the same size as my previous bicycle. However I never had this sort of knee pain before. I was worried I had mest up the sizing and should have got a bigger frame. Something very handy with this bike is the adjustable handle bar height. Even though I thought I set up the bike to the right height before we left I was able to make some slight adjustments along the way. The adjustments did ease the pain a bit but there was still that niggling feeling on the top of my knees.

I did all the double checking I could, stem height, saddle height, tilted the seat and moved it back a bit. The bike was so comfortable to sit on and super steady when loaded up with bags, but I still really wanted to blame the bike for my knee problems. Like a good craftsmen should never blame his tools, and unfit cyclist should never blame his bike. In the time and effort Stanforth bicycles I had put in to making a great bicycle, my body was still in the concept stages of design.

So Mayu and I were both well out of a shape, and had a bad case of cycle touring amnesia. We chose Istanbul as our start point and thought we’d take the quiet scenic route along the black sea. Reports from other blogs told us that its hilly, kind of brutal. But we love the mountains, enjoy the slow life and we can take it one day at a time. We studied the road a bit, looking at the elevation chart from sections of road. This is where our amnesia set in. Is that steep? Really we couldn’t remember what was steep, and didn’t bother to work out the gradient of the road. We just thought that it can’t be so bad.

Getting out of Istanbul is like trying to escape from hell, the roads are super busy, congested and the city just never ends. Not a cycle friendly place by any means. Sile is the first town thats close to but not within istanbul. At an altitude of 7m above sea level, it marked the start of the coastal road. From here we began some slow climbs to 100m, 200m but kept re setting to sea level. Progress was pretty slow, but that was expected, we had lots of time and just took each day as came. My knees were beginning to show signs of discomfort, but I shrugged it off and thought it would just take a bit of time to get settled on my new bike. The road had some hills but also some flat sections. It was leaving the town of Bartin when the hills really started to hit us. And they were relentless!

On the days when my knees were really hurting we had no choice but to continue. The road has no turn off, just forwards, or back the way we came. With days and nights below zero, cycling was the only thing keeping us warm, and inland would be much colder. Coupled with gradients averaging 15%. Going slower was not an option. We were already on our lowest gear zig zagging up the hill to reduce the strain on our knees. We had organized to stay in the small town of Inebolu, with a couple on couch surfing. It was quite honestly an island of paradise amongst these icey hills. We made it in five days after leaving Bartin, and our bodies welcomed the rest. I remember almost passing out after spending a few minutes inside their home. I wasn’t used to the warm temperature at all and it came as a bit of a shock to the system. Murat and Ipek our host were overwhelming friendly and hospitable. I just can’t thank them enough for the way they treated us. We were thoroughly spoilt!

The day after we arrived the snow came and lasted a couple days. We also found out there had been a landslide on the road ahead and tried to find out what our options were. I had ice packs on my knees. A bowl cheesy puffy crispy type balls of msg. Parking my butt firmly on the sofa in front of the tv. I wasn’t in any hurry to move and Murat just kept telling us to rest, eat more and stay longer. What ever you say doc!

We found out there was a bus leaving a few days later that could take us over a pass and around the landside. Once we hit Samsun the road would be dead flat and give my knees a chance to recover. After waiting those few extra days we felt ready to leave the comforts of their home. Unfortunately the bus we wanted wouldn’t take us past the landslide and we ended up further down the coast via Kastamonu. Once we were back riding on flat ground clocking up the kilometres, I soon forgot about my knee problems and the torment of those hills. But at times I wondered how many metres we had climbed in those couple weeks, following that hilly coast line. I tried to do some calculations in my head. Seeing if we had reached the height of everest. I could have named this post climbing everest! Turns out its much more than everest. In the 600km we cycled from Sile starting at sea level and ending at sea level. We climbed a total of 14,500 kms mostly at a gradient of 15%. This is a brutal road and next time, it won’t be our starting point for a warm up. 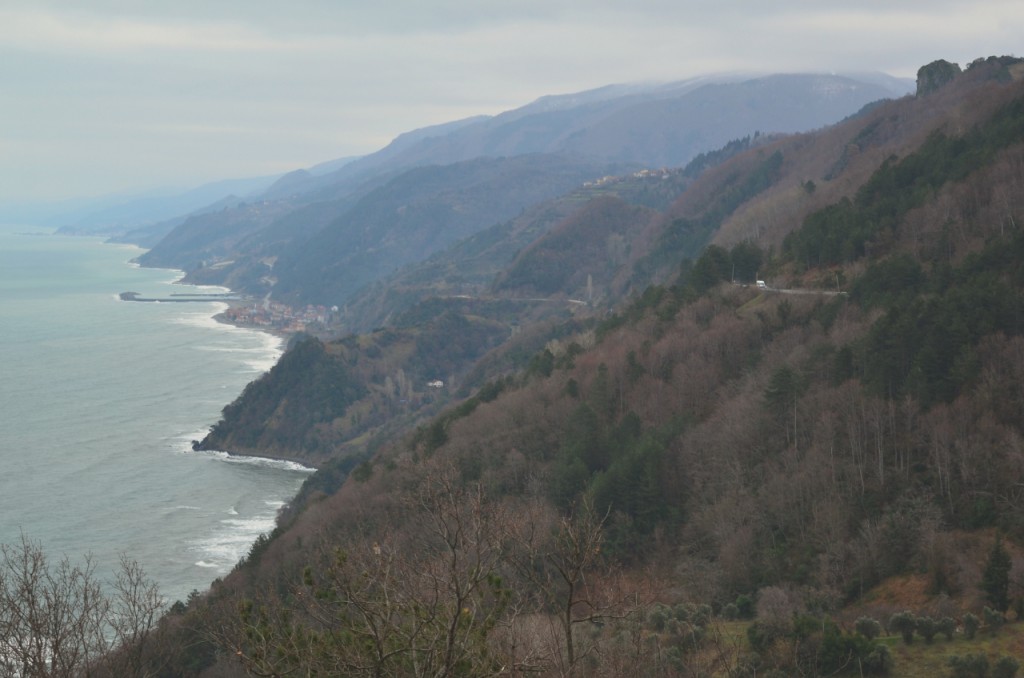 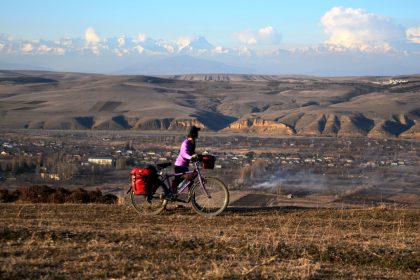